1. Spray nozzle or taped faucets- this one’s kind of sentimental for me… THIS is the VERY PRANK that fueled my fire and love for this holiday! The first April we were married, my husband took a rubber band and wound it tightly around the kitchen sink’s spray nozzle and left it aimed at where my face would be. When I turned on the water, it DRENCHED me! Haha! Of course, he knew that meant war!!! Twelve years later, we’re still going strong!
2. Fingernail polish spill- take a piece of wax paper and a bottle of fingernail polish that you don’t mind ruining. Spill out contents onto paper, let dry, peel paper off, and leave on victim’s clothing or an important document. You may want to do this one a week in advance. It takes quite a while for the polish to dry. I’d recommend using quick-dry nail polish and a hairdryer. If your “spill” doesn’t peel off the wax paper very well, just cut around it as close to the edges as possible. 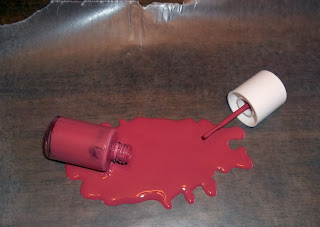 3. Blue teeth/ numb mouth- put a small drop of food coloring in the center of the toothbrush. Make sure to use the same color as the bristles. ALSO, you could put some oral numbing gel deep in the base of the bristles… one of my FAVE’S! 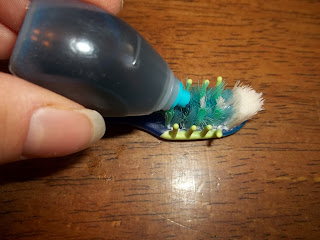 4. Superglue shampoo lid shut. It will make them have to unscrew the lid.
5. Icy Hot/Bengay or thumbtack toilet seat- smear a small amount of Icy Hot or Bengay on a toilet seat and wipe it mostly off so you can’t tell it’s there.
TRUST ME, it doesn’t take much for it to work! You could also line toilet seat with thumb tacks! Dun dun duuuuuun!
6. Soap that won’t lather- paint soap with clear fingernail polish and leave in the shower! 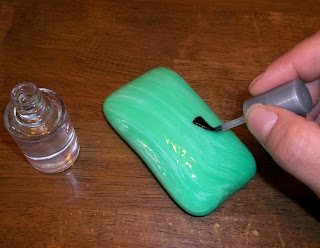 7. Glue end of toilet paper roll onto itself so victim can’t find it!
8. Glued-shut card- make a nice card for someone you owe a “thanks” to. Glue it shut so they can’t open it.
9. Taped light switch- My kids LOVE this one! They seem to forget I do it every year, too! Just tape it down so they can’t turn the light on.
10. Vaseline door knob- place a glob under the bottom of door know so you can’t see it.
11. TP the bed- While the victim is sleeping, roll TP under and over the bed so when they wake up, they’re stuck!
12. Place piles of confetti on top of ceiling fan blades so when it turns on surprise! This one would be fun for someone’s birthday, too! I have to say, it’s much better than the big old globs of lotion I used to squeeze onto the fan blades! My mom was NOT thrilled about the mess that one made! Haha!
13. Plastic wrap shampoo/salt shaker- Unscrew lids, place a small piece of plastic wrap over the opening, replace lid, and tear off the excess evidence.
14. Karo syrup towel- It’s clear, so you can’t tell it’s on there until it’s too late!
15. Hair gel hand soap- replace your liquid hand soap with the same color of hair gel.
16. Can’t use it gel/hairspray/cologne- using a temporary glue or double-stick foam, stick most frequently-used items to counter top or bathroom cupboard so they’re hard to pick up!
17. Whoopi cushion on the chair… you could also use bubble wrap!
18. Shoe surprise- you can stick either legos, small water balloons, or frozen coins inside victims shoes.
19. Cereal box/candy bag swap-out in original packaging

20. Bedroom doorTug of War- This prank can be pulled on two victims who have bedroom doors directly across the hall from each other (dorms usually work well for this). Use a rope to tie both door knobs to each other, with just enough slack to allow one door to open a crack. Then knock loudly on both doors at the same time. The victims will end up in a tug of war trying to get out.

21. Take a needle and thread and run it through every pair of underwear in the victim’s drawer, so that they are attached to one long string. When they get dressed, they will grab one pair but end up with them all!
22. All Sewed Up- This prank has to be done to a very sound sleeper. While they are sleeping, sneak in and use a needle and thread to sew their pajamas to the bed! I did this one to my husband last year and it was HI-LAR-IOUS watching him try to get out of the bed! I, of course, had to set him free. We both had a good laugh over this one!
23. Have A Cold One- If your victim wears the same hat every day, take it the night before, get it wet, and put it in the freezer. Right before the victim gets ready to leave, place the hat in the normal place. They will get a chilly surprise! You can also do this to a woman’s bra!
24. Out is the New In- Turn your victim’s backpack inside out. Wait until they’re not around, then take everything out of their bag, turn it inside out and replace the items. Then wait for their surprised reaction! I’m soooo doing this to my kids this year!
25. Blast ‘Em- Set the victim’s TV to an obnoxious channel like Cartoon Network or the heavy metal channel, and turn the volume up to max volume. Now turn off the TV set. When your victim comes back and turns on the TV they will be surprised by a blast of loud programming!
26. Going Buggy- This one takes some prep time, but I think it would be cool. Take a picture of the top part of the kitchen counter. Go on the internet and search for a picture of a cockroach. Then, copy it onto the picture of the counter. Print out a few copies (cut off any extra white space), and place them on the counter. At first glance, your victim will think the kitchen is infested! This would be AWESOME if you did it to a germ-a-phobic friend!
27. The Run Around- Set this prank up ahead of time by letting the kids know you’re planning on having some painting done in the house. Then, before they come home from school, put up two signs: on the front door – “Wet Paint – Use Back Door,” on the back door – “Wet Paint – Use Front Door.” Then see how many times they’ll run around the house trying to get in.’
28. Set your friends/family up to think you’ve prepped a whole bunch pranks for them… they do nothing and watch them nervously anticipate tricks that never happen all day. This is the lazy holidayer’s approach. Oh well, at least it’s something!
29. While You Were Sleeping- Carefully paint the toenails/fingernails or draw eyeliner mustaches on your victim while they are sleeping. We did this to our kids last year. It was so awesome because they had no idea (about the mustaches) until they went to the bathroom to get ready! One of them didn’t discover their pretty toenails until after school that day! Haha, got ya!

30. Job/Chore Chart Switch- If you have a job/chore chart in your home, change it up! Instead of their usual jobs, have them do things like Bark like a dog 10 times, Pay the bills, Drive the kids to the park (great for young kids), Mow the lawn using scissors, Wash your clothes by hand, Sweep the driveway with a toothbrush, Jump on the trampoline without stopping for 20 minutes, Touch your nose with your tongue, Tickle Elmo, Count your toes, Sing an opera song–mom’s choice, and more. Of course they know you’re joking, you decide if you want to use things they can really do or not. My kids didn’t end up doing any of them, but sure got the giggles while reading them! You can get creative and come up with whatever is funny to your family!

**This one was suggested by a viewer…
31. Have you ever heard of the Mento’s and Diet Coke explosion experiment? Well, HERE’S a video showing how to turn it into a prank! So awesome! Just make sure it’s done OUTSIDE! Maybe at an outdoor BBQ or something. Too funny!
(**Thanks, Emily!)

LAST, BUT DEFINITELY NOT LEAST,

32. Set alarms & clocks ahead an hour- this one is probably the most important one! If you plan to do a bunch of time-consuming pranks, DO THIS FIRST!!! You don’t have to do it to all the clocks, just the alarm or cell phone, and the bathroom/bedroom ones they see first.
april fools day